It was a lovely sunny day in Vancouver and the Hilder family again hosted a spectacular evening of piobaireachd tunes.

Alexander Schiele was the feature piper for the evening. He recently had success at the Nicol-Brown invitational competition winning the piobaireachd and overall award. His tune for the evening was “The Piper’s Warning to His Master”. The castle Dunyveg on the south end of the island of Islay was a stronghold of the MacDonalds. One version of story is that the castle was going to be attacked from an approaching ship and a prisoner aboard plays a piobaireachd using false notes so that the Chieftain will understand the message. A second version of the story is that the Chieftain is returning to his castle unaware that it has been taken. A captive piper plays the piece with false notes to warn of the impending danger. In both versions of the story, the prisoner is dealt with as the captors also understand the warning.

The next piper to play was Aaron Stone with “Lament for MacDonald of Kinlochmoidart #1″. There is some suggestion that either this piece was played as a lament for Munro of Foulis or that the lament played served as a theme for this composition. An alternate view is that it was a much older composition whose name had been lost. Munro was killed at the Battle of Falkirk in 1746. MacDonald of Kinlochmoidart was a respected poet and soldier who fought on the Jacobite side. He was captured and hanged after Culloden.

Making his debut at the club was ten year old Kendrick Rutherford. Kendrick was the Grade 4 Aggregate winner of the Mini-Gathering season this year. Kendrick played the ground and first variation of “Stuan Robertson’s Salute”.  During the battle of Bannockburn, King Robert the Bruce was so overjoyed at the arrival of Clan Duncan (led by Donnachadh Reamhar) that he asked Donnachadh to name his first son Robert. Robert Riach, great grandson of Donnachadh Reamhar captured the murderers of King James I in 1437. It was after this event that Chlain Donnachaidh (children of Duncan) took the name Robertson. 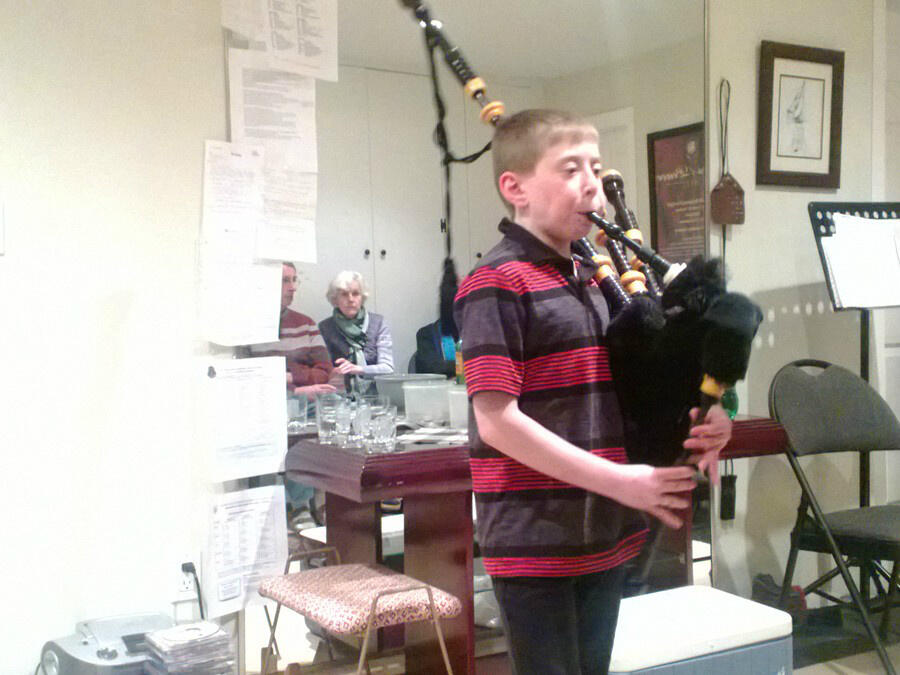 Liam Hilder followed with “Lament for the Son of King Aro”. There is not much known about this piece, nor has it been played that often at the Club.

The BC Pipers’ Association Annual Indoor Gathering will be held March 29th and March 30th at Simon Fraser University. The Open, Grade 1, 2, and 3 Piobaireachd events will start at 10AM on the Friday. There will be and adjudicators recital featuring Allan MacDonald, Colin Clansey and John Scullion starting at 7PM. Allan MacDonald is a true scholar of Piobaireachd having won awards of the highest level and studied the origins of the big music. On the Saturday, there is another Piobaireachd competition for competitors in the B and C grade.

The next club meeting will be at the home of Bob and Mary McIlwaine in April. The date and piper of the month will be announced shortly.