The following is the third and final article in a 40th anniversary series about Jack Lee’s Gold Medal and Silver Star wins at the Northern Meeting in Inverness in 1981.

“The year 1981 seems so long ago but I still have vivid memories from that amazing summer. It was the 2nd year in which I was eligible to compete in the Gold Medal and Silver Star competitions at the Northern Meeting in Inverness. It was an exciting opportunity and I had been looking forward to that September for many months. I had competed in both events two years prior in 1979. Although I felt I had played quite well that year I just wasn’t able to “crack the prize list”. In those years I was seeing Jimmy McMillan for lessons very regularly and just trying to improve as much as possible. At the 1981 BC Pipers Annual Gathering, the two overseas judges were Jimmy McIntosh and Murray Henderson, two huge figures in piping. That particular weekend Jimmy McIntosh approached me and invited me to come and stay with him in Little Brechin, Scotland prior to the Northern Meeting. I saw that as a great opportunity and was happy to accept.

I stayed for several days at the McIntosh home prior to the Northern Meeting. Also staying there were four excellent young North American pipers, Mike Cusack, Amy Goble, Albert McMullin and Peter Kent. I had only previously met Mike but it took no time at all for the five of us to become fast friends. They were doing much the same as me – practicing hard and getting ready for the Northern Meeting. Jimmy was listening to each of us and giving us pointers. In 1981, synthetic pipe bags and reeds had not yet been invented. I was playing my MacDougall drones, cane drone reeds, Naill chanter and a sheepskin bag. In those days the tone was very harmonic but hard to control. Sadly, excess moisture and wandering drones were a common occurrence for most of us.

Competing at the Northern Meeting can be a tad overwhelming – so many pipers, so many tremendous and famous pipers…they seemed to all be there. I remember in 1981 I was becoming a bit better at blocking out the distractions and just focusing on my own playing until I was done. In the Gold Medal event I remember being in the final tuning room when the steward came in to tell me my tune was “Black Donald’s March”. I was very happy about that as I felt pretty confident with Black Donald’s March, or at least I thought I could do a good job with it. I was playing the standard setting with one exception – the additional Variation 2 Doubling from Donald MacDonald’s manuscripts. Jimmy McIntosh had shown that to me. I really liked it and have been playing it with that tune ever since. By the time the steward had come in give me my tune Murray Henderson had popped in just to give me a few words of encouragement. I remember blowing up my pipes and doing what I usually did in my “cane-days” – give the bag an extra hard squeeze to find out how close the drones were to the stopping point. My bass drone did stop and I could see a terrible look of shock on Murray’s face. He kindly and rapidly offered me one of the little wires that pipers used in those days to keep their cane drone reeds open. Murray didn’t realize at the time that the extra-hard-squeeze was a technique that I used regularly so I understood why he was so shocked. We had a good laugh about that later. Anyway, I declined the wire and concentrated on not over-blowing during the piobaireachd.

The Gold Medal performance came and went quickly. The bagpipe was really solid and I remember thinking on the stage that it was probably the best tone I had ever achieved up to that point in time. A funny thing happened during that piobaireachd – I kind of “zoned out”. That was the first time in my career that I recall that happening. I have had it happen many times since. I began playing and pretty soon I was done but just couldn’t recall playing all the variations along the way. I had played among the last few competitors in the class so it was only a couple of hours until the results came out. I wasn’t in the actual theatre when they announced the results – it was Amy Goble and her mother who told me. We had a good hug over the happy news. I remember having a hard time getting to sleep that night as I was pretty excited about having won the Gold Medal.

The next day started off pretty relaxing. The Former Winners MSR wasn’t held until the evening so I really didn’t have much to do 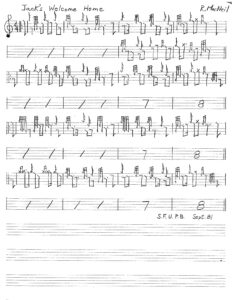 The original manuscript of “Jack’s Welcome Home” – composed on the evening of his celebration party.(The “S.F.U.P.B.” text in the tune’s footer was later added when the band added it to their repertoire)

during the daytime. I wandered over to the Eden Court Theatre during the day to listen to some of the excellent piping. A young person came up to me and introduced themselves as a BBC producer. He explained that they were producing a film titled “The Glorious Effect” which looked at the growth of piping around the world. They had heard that a young Canadian had just won the Gold Medal and they asked me to be filmed for the movie. So, I dashed back to my B&B to collect my pipes and kilt and then played a bit of Black Donald’s March for them on the lawn outside the Eden Court Theatre. My clip did appear in a small segment of the movie (“The Glorious Effect”, Jack’s performance starts at 38:14)

Playing in the Former Winner’s MSR seemed intimidating as most of the legendary pipers, who I looked up to, were in that contest. I had routinely played big MSR’s back home when the tunes only had to be played once through. In this contest at that time the piper played their March twice, Strathspey twice and Reel twice. I knew that would be challenging with some of these long and difficult tunes. About six-years prior to 1981, Capt. John A. MacLellan had given me a great suggestion; he told me that he would practice the tunes three times through so that when he had to play them twice through in an actual contest it wouldn’t seem so difficult. I had done that a few times but had pretty much stopped doing it only because it would take too many days to get through all my tunes. Jimmy McMillan and I had a routine for 1981 and many years subsequently: he would mix up the sets, give me a MSR to play at lessons, only a minute or so to think about it then on I would go – playing the 3 tunes twice over each. I was fairly late on in Former Winner’s MSR so I had a chance to hear a few of the early competitors. I thought they were tremendous but I noticed that they were all playing shorter tunes than I was. The steward came into my tuning room to tell me the piper before me was on the platform and my tunes were: Bonnie Ann, Cameronian Rant and The Little Cascade. I had a few minutes just to run through the breaks, fine-tune the pipes and the steward came back in to tell me I was on. The rest is a bit of a blur. I remember the pipes were so nice to play in that event and I felt confident with the playing. The judges were very famous – John D. Burgess and William MacDonald. I noticed that they pretty much sat back and listened while I was playing – they didn’t seem to write very much. When I finished I noticed some movement in the audience. It looked like some people had stood up and were applauding. People would tell me later that people had actually stood up. For me, it was just the finish of a demanding performance and I headed off the stage.

It would turn out to be one of the most successful two days of my career as I had won the Gold Medal and Silver Star. It changed my future in a several ways, including the opening of many doors. I was about to compete exclusively in the Premier events in Scotland, which at 23-years of age, I did not feel entirely ready for. At that time I was the youngest competitor in the Former Winners MSR. Forty-years has certainly changed that as I am now the oldest. As young North Americans, we had gone up to Inverness. It was a special trip for us all as Mike, Amy, Al, Peter and I had all won prizes – we were all happy. Our paths have crossed a few times over the years and we always flash back to 1981 and our Brechin days and our superb trip to Inverness.” 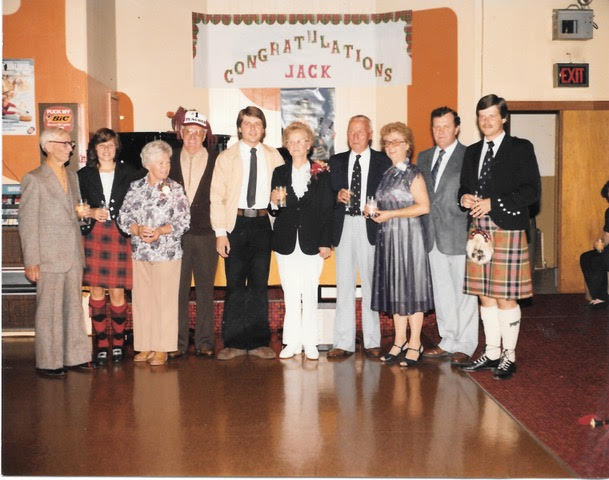 Jack’s Welcome Home and Epilogue
On the day Jack landed back in Vancouver, he was taken to a celebratory party in his honour which included his extended family, his long time teacher and mentor Jim McMillan and many members of the local piping community. Unfortunately, Jack’s luggage with his uniform did not arrive with him so he had to dress in regular clothes. 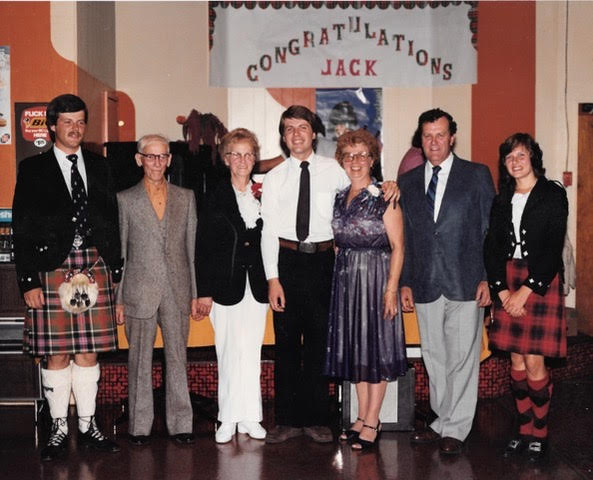 On November 5, 1981 at the regular BCPA Knockout competition, BCPA held a “Jack Lee Appreciation Evening” where BCPA President Bill Lamont presented Jack with a Life Membership in recognition of his extraordinary achievement and contribution to the advancement of piping in BC. Jack then performed his Silver Star winning March, Strathspey & Reel and several other selections.

That significant honour bestowed upon Jack has been continued as a tradition by subsequent BCPA Boards by the awarding of a Life Membership to BCPA region pipers who win the Gold Medal at the Argyllshire Gathering or the Northern Meeting.

Over the four decades since his ground breaking achievement, Jack has become one of the most decorated pipers in history, and through his teachings advanced the skills of thousands of pipers, including Bruce Woodley and Alan Bevan who also went on to win the Gold Medal.

BCPA is very proud to honour Jack’s many and varied contributions to the advancement of piping and as an exemplary BCPA member and role model for generations of pipers.