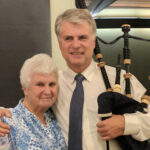 I’ve been to the Northern Meeting about 30 times over the last 50-years, but the most memorable was 1981 when Jack Lee won his Gold Medal. I’ve known many of the Gold Medalists.  Well, some even stayed at my house when they were judging at the BC Pipers’ Annual Gathering. But I hadn’t known any of them since they first began competing as wee boys in the Novice class. Jack’s granny, Mrs. Bend, would bring him and Terry to the Games and because I was usually scoring the piping events, I’d be the first person, after the judge, to know Jack had won a competition. Over those years, I got to know Jack well as he piled up the prizes and grew into a young man. While he won consistently more than anyone, he was always the polite and unassuming, “Gentleman Jack” he would be fondly nicknamed.

In September 1981, I was staying round the corner from the Eden Court Theatre at Neil Angus and Nan Macdonald’s; Neil (a pupil of John MacDonald of Inverness) was a piobaireachd authority. I am not a piobaireachd aficionado. The small music I can listen to all day, but I would always go and hear Jack’s piobaireachd performance. Nor could I tell you if a competitor had made a small mistake eliminating them from contention. When the ever-reticent Neil Angus happened to pointedly mention that “Young Jack played well today.” I knew Jack would be in the running for a prize.

As they announced the prizes and Jack’s name continued not to be called, I was gripped with a stomach wrenching tension – perhaps Jack hadn’t placed at all – and building excitement that the wee boy I’d watched grow up and grown so fond of might just be the last name to be called.

When it came time for the winner’s announcement and with a slight pause for dramatic effect: “The Winner of the Gold Medal is ….Jack Lee”. I was beside myself with excitement. Frankly I was so excited I can’t remember much of what happened next. What I do remember is Jack marching on stage, desperately trying to contain his elation and smartly saluting the presenter before accepting his prize.

The rest of that day is lost to memory but I do remember standing in the foyer of the Eden Court Theatre amidst a small congratulatory crowd and Jack letting me hold his trophy when a newspaper reporter asked me how it felt to be the mother of the Gold Medal winner – I replied in a surprised voice “Oh, I’m not his mother!” and we all had a good laugh.

The next morning sitting at breakfast with Neil Angus, Nan and Donald, my late husband, the headline in the local morning paper was “Canadian wins Gold Medal!”. I still have that clipping and that day is my greatest piping memory of my more than 90-years. Thank you, Jack!