Iain MacDonald is the long-time pipe major of the City of Regina Pipe Band and the piper and instructor synonymous with the advancement of piping and pipe bands in Saskatchewan for decades. In the mid to late 1980’s he lived in the Greater Vancouver area with his wife Barb and played with the SFU Pipe Band. Iain was editor of the BC Pipers’ Newsletter from December 1988 to December 1989. 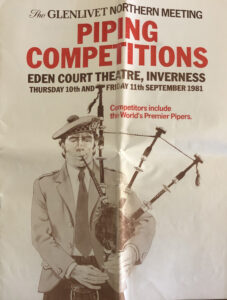 The Northern Meeting of 1981 is memorable to me for a few reasons, and one of them was being witness to some fantastic playing. I was living in Scotland that year, taking lessons, playing in a band, and trying to make up the gap between me and the standard for top competitors.

I travelled to Inverness that year with friends Jimmy and Pat Hamilton, who were kind enough to spare me the price of a train ticket, and they also fed me royally along the way. I’d booked a B&B, and arrived at Eden Court Theatre on Thursday, September 10, where I listened to a few tunes, had lunch with some Renfrew band mates, and then got the pipes going to play in the Silver Medal and March events that afternoon. Neither went particularly well for me.

I heard bits and pieces of tunes, including a little of the taorluath and crunluath of “Black Donald’s March” through the door when Jack Lee was on stage. There was quite a bit of chat about Amy Goble from Ottawa and her win in the Silver Medal. Excellent! Jack’s tune would also prove a winner, and I was sorry I hadn’t got right in to hear it all.

The next day I was up early and struggling to get pipes going for the Strathspey and Reel. As I think about it now, it’s no wonder it was a struggle. Playing a too-large hide bag, all cane reeds, no water trap, and not enough knowledge of how to manage it all, the pipes were unstable and I scratched from the event, and decided to just listen. 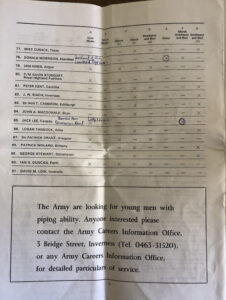 I heard the entire Clasp event and the Former Winners March, Strathspey & Reel. That year Bill Livingstone won the Clasp, and my diary for the day notes that I thought Iain MacFadyen had a great tune. I was amused at the baby powder for the hands when Bill played and amazed by the brilliance of his sound and music. The highlight of the weekend for me, though, was being witness to Jack Lee’s MSR performance: “Bonnie Ann,” “Cameronian Rant” and “The Little Cascade,” twice through each tune.

Over the subsequent 40 years, we’ve become very used to the energy, precision and musicality of a top Jack Lee performance, but I’d have to say there was something even more electric from this one. Even Jack’s entrance onto the platform felt like an explosion, and the feeling of intensity increased with the rapid-fire tuning phrases, and then…I couldn’t believe how effortlessly it seemed that every technical nuance floated out, all delivered with drive and energy, but never over the top.

It was an amazing performance and received a huge ovation at the end. Everyone in the hall knew they had just witnessed something very special.