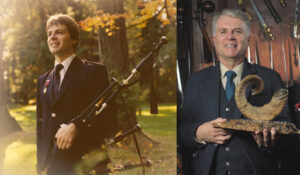 It is a remarkable achievement. The year 2021 marked the 40th anniversary of one of the most catalytic events in the history of piping in British Columbia: Jack Lee’s capture of the Gold Medal and Silver Star at the 1981 Northern Meeting, the first by a British Columbia bagpiper.

His historic achievement and subsequent teachings of students paved the way for two more generations of BC pipers to capture Gold Medals and established the BCPA tradition of awarding a Life Membership to BCPA region pipers who win the Gold Medal at the Northern Meeting or Argyllshire Gathering.

With his capture of the 2021 Glenfiddich Piping Championship, Jack capped an amazing anniversary year and demonstrated a longevity of piping excellence unmatched in the history of competitive piping.

While thousands of people around the world watched Jack’s 2021 Glenfiddich Pipe Championship performances via the National Piping Centre internet livestream, in 1981 there were only two BCPA people who saw Jack’s Gold Medal and Silver Star performances in-person.

The series of articles this week presents their reminiscences of those historic performances and concludes with Jack’s personal memories of his 1981 Northern Meeting experience.