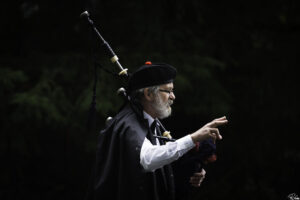 If you’re intrigued or fascinated by piobaireachd, this is the seminar for you.

On November 27, well-known BC piper Hal Senyk will present an online Saturday seminar on “Piobaireachd for Beginners”. Hal has had a lifelong obsession with the study and enjoyment of piobaireachd. He started playing as a young man with instructor Archie Cairns, and has taken instruction from Bob Hardie, R.U. Brown and Andrew Wright.

Hal has been a fixture on the west coast piping scene since the 1970’s. He played with legendary Muirhead & Sons Pipe Band which won the world’s five times in the 1970’s. He is the former pipe major of the Grade 1 Triumph Street Pipe Band, becoming the first overseas band to place with a 4th at the European championships in 1976 and a 5th at the World’s, with the drum corps placing first.

Hal has played with the Abbotsford and Maple Ridge (New West) pipe bands and currently instructs with the White Spot Grade 4 band.

Hal was a successful solo competitor for many years, having won professional prizes in light music and piobaireachd.  He was the first Canadian to win a major prize in Scotland, winning the March competition in Inverness in 1972, helping to set the stage for more Canadians to make their mark on the Scottish piping scene.

Hal has been an active teacher and adjudicator for many years, a director of the BCPA, and remains an ardent “professional student” of the music.

Hal’s seminar will address piobaireachd for beginners, introduction to structure and types of piobaireachd, and some history of “the big music”.

To register for the seminars, please use the following link :