In June 1971, while the Province of British Columbia was preparing for its centennial the following month of joining Confederation, several enthusiastic members of the Delta Municipal Police Department formed the fledgling Delta Police Pipe Band.

The Municipality of Delta contributed funds for the band to purchase practice chanters and drum pads for these keen beginner musicians and Gary Toope and George Palmer were their first piping and drumming instructors, respectively.

Developing proficiency in the instruments was challenging for many of the beginners and while attrition occurred, several skilled players began to step in to fill the void. 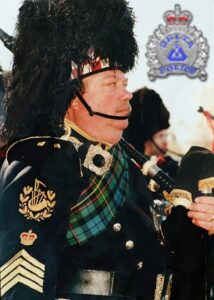 From there, Pipe Major Topp set about to raise the standard of play of the members, acquire uniforms for the band members, including borrowing jackets and using the Delta Police Store for other uniform parts with the goal of becoming parade ready.

In November 1974, the band was thrust into its first public performance with the tragic death of Delta Police Staff Sergeant Ronald McKay who had been killed in the line of duty.

From that first duty performance, the band under Pipe Major Topp grew in calibre and stature in the local community and in the greater world-wide pipe band community. Pipe Major Topp and his successors since his retirement in 2000 have led the band to significant numbers of community and police performances, travels around the world to perform at the major tattoos, the largest double-night sold out Rabbie Burns Dinners in the region, and twice performed “Mull of Kintyre” with Sir Paul McCartney at his Vancouver concerts.

In celebration of their golden anniversary, the Delta Police Pipe Band has prepared a commemorative video including memories of the band over these years and featuring the new composition “Fifty by One” by Bruce Topp.

BCPA congratulates the Delta Police Pipe Band on its significant anniversary and its great contributions to the public and pipe band communities and wishes the band continued success in being a tremendous beacon for promoting piping and drumming in the general community.