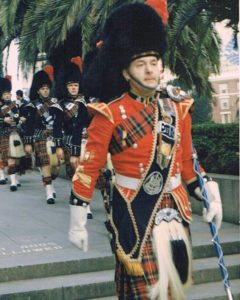 In lieu of flowers, donations may be made to the charity of one’s choice. Condolences may be sent to the family by visiting http://www.springfieldfuneralhome.com/obituaries/bellamy-donald-herbert-arthur/

Don’s significant influence on pipe band drumming in Vancouver was far reaching in his instruction of young drummers. In recognition of his contributions to the Scottish cultural community, he was the Chieftain of the Day at the BC Highland Games in 1990 and in 1999 BCPA established the Don Bellamy trophy for the BCPA Grand Aggregate in Open Drumming.

In a personal tribute, BCPA senior adjudicator and prominent drumming instructor Scott Robertson shares his memories of his inspiring and influential first instructor.

I had my first drum lesson with Mr. Bellamy back in November 1968. He devoted his Saturday mornings to teaching drum lessons in his basement on Dundas St, East Vancouver. No drum pads. Up to four kids at a time gathered around his oak table. We all played right on the table. He built a little box for the smaller kids to stand on. To this day I still remember walking along the side of his house to go in for my lesson and hearing wood hitting wood. This created a rhythmic sound that still intrigues me and draws me in fifty years later. If you were his student, he would make you feel like your lesson was the most important thing he had to do all week. He would always make you feel like you had just reached the next level of your development, never that you were falling behind.

Bellamy’s contribution to pipe bands and drumming in Vancouver is immeasurable. He was a co- founder and director of the White Spot Pipe Band (Originally called Hastings East Pipe Band, later the Optimist PB). One of the things Bellamy had said to me was “As long as I am director of this band, we will never play a competition.” He greatly respected competing bands. He spoke highly of the band’s co-founder, Malcolm Nicholson, who parted ways with Bellamy to form the Vancouver Kiwanis Boys Pipe Band, which was in Bellamy’s words “a very successful competition band”. Bellamy, however, had a different agenda in mind. He kept the band busy playing parades, tattoos, shows and corporate events. He wanted to help young kids understand the value of discipline, military structure and leadership. I think he saw pipe bands as an excellent medium for this goal. With Bellamy, it was understood that promotions followed dedication and that seniority came with expectations. He had patience with the kids that struggled to play their music and encouragement for those that caught on quickly. If he saw one of his students doing well in solo competitions and a yearning to be in a competing band, he would help that student advance, personally calling the lead drummer of a competition band on that student’s behalf. He held no grudges when it came to his students’ goals being at odds with his band’s agenda.

As a successful businessman, Bellamy was well connected. The band had great trips and he made sure that it always had the best of everything. He also expected performances and behaviour that honoured the opportunity.

Many of us older drummers had lessons around that oak table and did our time in the Optimist or White Spot Pipe Band under his watch. Some of us are still playing, all these years later and some are passing the torch to the next generation.

On a personal note, I’ve made a career as a drummer and drum teacher. I don’t know if I will ever live up to how I remember Mr. Bellamy as my teacher. He gave me a feeling that I was good at something. He gave me a push in a direction that I needed to go. I think he gave that to all of us that gathered around his oak table every Saturday morning.

The pipe band scene is very different today than what it was in the 50’s and 60’s. B.C. pipe bands have produced some great drummers and drum corps over the years. Without question, the standard here is very high, thanks to the many dedicated drummers who have given their time to play, teach and run pipe bands. I, however, still lament the vacancy left by a man who founded a band that is still in operation sixty two years later. A band that has produced many pipers and drummers that moved onto different piping and pipe band organizations all over B.C; A man who taught kids how to march, present themselves on parade and saw character building as the primary goal and competitive drumming as something to be moved onto afterward.

Thank you for all of that Mr. Bellamy.