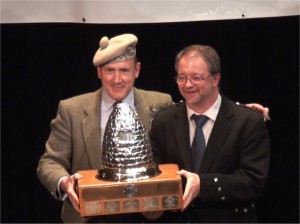 Halifax piper Bruce Gandy has clinched the BC Pipers’ Association MacCrimmon Memorial Cairn and Medal as the winner of the Open Piobaireachd and the Mary MacLeod Collins Memorial Trophy for the Open piping aggregate at the 2021 Annual Gathering, held online April 2 & 3, 2021. 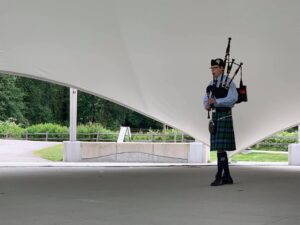 Other winners in the online competition included Andrew Carlisle who won the Duncan McInnes Memorial Trophy for Open MSR, Kyle Howie who won the Donald MacDonald Shield for Open Jig, and Brodie Watson-Massey who won the CPA “C” grade Piobaireachd. 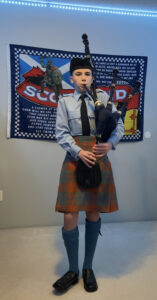 The 88th Annual Gathering was held online, with competitors in the lower grades submitting videos in advance, while Grade 1, Open & CPA grades players competed live, via Zoom, and then uploaded their performances. Adjudicators for the events included Chris Armstrong, Rob Wallace and Paul Brown.

“There were lots of technical challenges with this online competition, and I thank the team at BCPA for their hard work in pulling everything together,” says Chief Steward Lynn Bullis. “The digital stewards, the IT team working to resolve issues and all the other volunteers behind the scenes did a great job, and I thank them.”

“Overall, the event was a success. The online component attracted competitors from around the world, which was great.  Now, we would love to see them all here in person next year, for our 89th Annual Gathering.”

Full results of the 88th BCPA Annual Gathering can be found on the BCPA website. Click HERE.