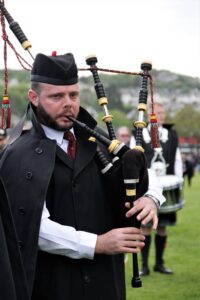 Chris Armstrong is regularly featured in the prize lists on the solo competition piping scene with his most notable result being a Gold Medal win at the prestigious Northern Meeting Piping Competitions. He is now a senior judge for the Solo Piping Judges Association. Chris was appointed the Pipe Major of the Scottish Power Pipe Band in 2006 and has led the band to the runner up spot at the World Pipe Band Championships in 2012 with consistent top six placings at all the major championships over the last 15-years.

Rob Wallace has had great success as a solo piping competitor, including winning the Gold Medals at Oban 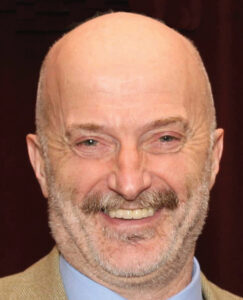 and Inverness, the Former Winners MSR at Oban, the Clasp at the Northern Meeting and a notable double in 1989 when he won both the Bratach Gorm (Blue Banner) and Gillies Cup in London – the first piper to achieve this since RU Brown in 1962.

Another notable double came in 1997 when he won the Dunvegan Medal and Clasp on the same day at the Skye Gathering. As a band player, he competed with Muirhead & Sons under Pipe Major Robert Hardie, and as a folk artist with the band the Whistlebinkies where he pioneered the use of bellows blown pipes.

For 15-years, Wallace was the editor of the Piping Times magazine and principal of the College of Piping in Glasgow where he was instrumental in rebuilding their premises in Otago Street. Robert is currently editor of Piping Press web magazine and president of the Piobaireachd Society. He is a professional journalist and writer and has used this and his musical skill to produce many books including the Glasgow Collection of Bagpipe Music, Bagpipe Tutor (Volumes 1 – 3), The Bagpiper’s Handbook, and Young MacCrimmon and the Silver Chanter. He has made numerous recordings both as a solo artist and with his band, and has performed with the Royal Scottish National Orchestra and the BBC Scottish Symphony Orchestra.

Paul Brown has been drumming since the age of seven.  He began his drumming career with the Ballingry School pipe band, winning many major championship titles before progressing to the ranks of grade 1 at the age of 13 with Dysart & Dundonald Pipe Band.

In 2007 Paul joined the St Laurence O’Toole Pipe Band of Dublin and remained with the band until his retirement from competitive pipe band drumming in 2015. During this time he won 13 major Grade 1 drumming titles including the grade 1 world championship and a champion of champions title. Paul is also the only Grade 1 drummer in history, outside of Ireland to hold six grade 1 All Ireland drumming titles. Paul was also a member of St Laurence O’Toole during their most successful period to date including the 2010 World Championship win.