Gordon Sinclair
(taken shortly before his death in 1955)

On December 7, 1955, 40 year old Constable Gordon Sinclair was killed in the line of duty investigating a potential burglary in the False Creek area of Vancouver.

While I and many other BCPA members were born after his passing or were too young to remember the events of that time, his legacy has been documented by the Vancouver Police Department, the Vancouver Police Pipe Band, and the work of the late Carl Ian Walker in the “Pioneer Pipers of British Columbia” book.

Gordon Sinclair was a man well ahead of his time as a pipe band musician, playing all the instruments (pipes, snare, tenor, and bass), competing solos at the top level, studying piobaireachd as actively as light music, composing tunes, piping for highland dancing, and actively teaching many students.

He also gave of his talents to administrative aspects of our art, as a member of the BCPA Board of Directors, rising to become President in early 1955.

For me, the legacy of Gordon Sinclair is personal.

The first hornpipe I learned was “Aileen E. Sinclair“, a composition of Gordon’s for the eldest of his highland dancing daughters.

Fred Brodie, who was teaching the junior band I played in then (the Richmond CP Air Senior Pipe Band) thought so much of the tune that he included it in the first Medley the band played in 1972, our first year in band competition. 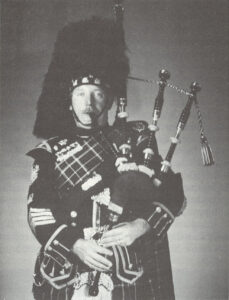 From that day I have loved that tune, and years later I asked Gordon’s son Ian Sinclair for permission to include it in my first book of bagpipe music in 1990, which he kindly granted.

I have such great respect for Ian’s dedicated service, following in his father’s footsteps and rising to the highest leadership of pipe bands first as Pipe Sergeant and then as Pipe Major of the Vancouver Police Pipe Band and in his profession as Inspector in the Vancouver Police Department.

In the early 2000s when BCPA initiated the photographing, scanning, and optical character recognition of its historical Board of Directors Minutes, I examined the hardcopy records of 1955.

I remember reading the Minutes of a special BCPA meeting on December 10, 1955 and contemplating how the Directors, several of whom were Vancouver Police Pipe Band members or had been taught by Gordon, would have been grappling with the tragic loss of their President, controlling their emotions, and navigating their role in what was quickly becoming a major public and civic memorial ceremony.

The Vancouver Sun story records how the Vancouver Police Pipe Band led the funeral procession through many blocks in the centre of downtown Vancouver, with Gordon’s pipes being carried in the procession.

Four days before Christmas, the Scottish community rallied to support the fund established for his family with a benefit concert.

In the decades since, the Vancouver Police Pipe Band has continued to honour Gordon’s memory with annual remembrance, with the Gordon Sinclair Memorial Fund, and continued to be exemplary ambassadors of the City of Vancouver with their major world-wide travels and performances in addition to their significant performances for community events and civic ceremonies, keeping piping and drumming.in the public’s mind.

I have returned to the particular BCPA Minutes page and other pages of the surrounding years many times since I first examined them, to reflect on Gordon and the BCPA President’s work he was involved in at the time. The weekend before his untimely death he travelled to Seattle for a meeting of highland games associations in the Pacific Northwest to discuss ways to achieve improved consistency of piping and pipe band competitions.

Through its ongoing efforts over many decades, BCPA has continued fulfilling Gordon’s work, in the working together of BCPA and highland games across the Pacific Northwest for the advancement of piping, drumming, and pipe bands across the region.

To the extended Sinclair family, we commit our efforts in memory of Gordon for the advancement of our art.