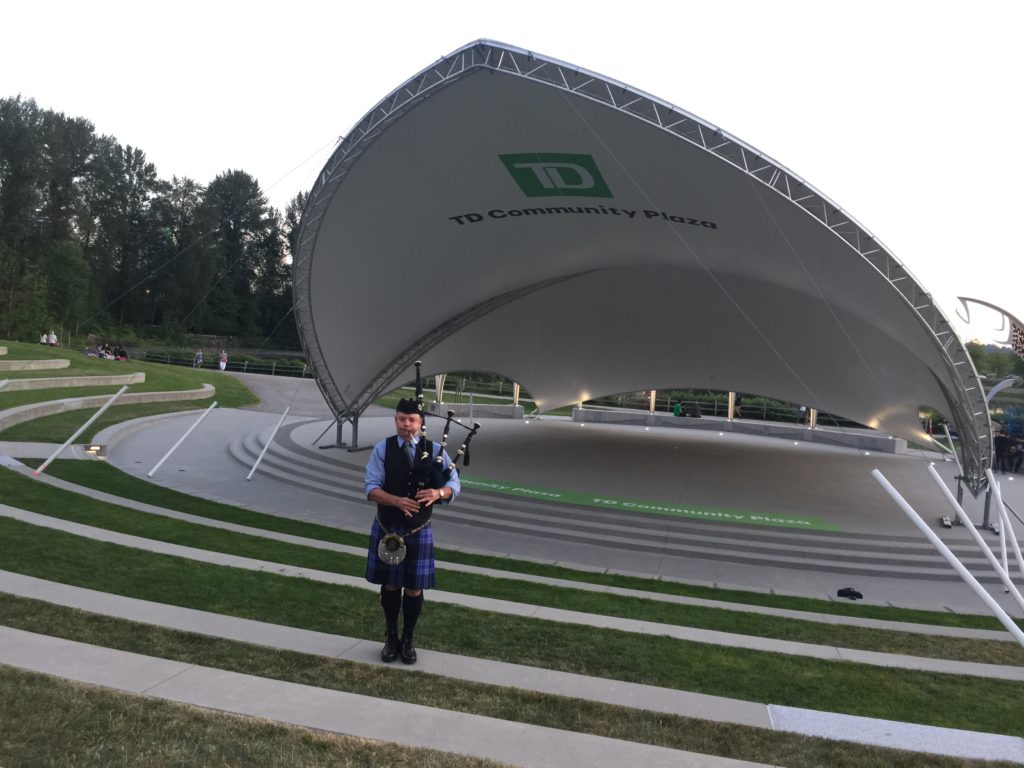 There will be a beautiful new venue for the 2018 BC Highland Games & Scottish Festival Open Pìobaireachd competition on Friday, June 15.

“We are moving the competition from the field at Percy Perry Stadium to the new outdoor TD Community Plaza stage at Lafarge Lake Park,” says Games chair, and BCPA director Mike Chisholm. “This is a magnificent facility situated on a lake, inside a park that could soon be home to the BC Highland Games.”

The large stage is an ideal covered setting for the competition, with a wide-open main stage and great acoustics. It has plenty of seating for attendees and is sure to attract a large crowd from the general public who also may be in the area.

“Rob MacNeil and I tested the stage for acoustics and we couldn’t be more pleased,” says Chisholm. “This site will allow the competition to be much more open and accessible, and that’s one of my goals as Games chair, as a piper and BCPA director; to promote pìobaireachd to a wider audience”

Open pìobaireachd is one of the core events of the Coquitlam games, allowing the public a chance to see and hear some of the best professional pipers from the Pacific Northwest in a beautiful setting on a lake within a park.

The City of Coquitlam spent more than three million dollars to build the stage and improve the adjacent park.  It is now used mainly for City of Coquitlam functions such as Canada Day, but it could soon be home to the BC Highland Games.

“We have been talking to the City for more than a year about relocating the Games from Percy Perry Stadium, where it has been for the past 27 years, to Lafarge Lake Park,” says Chisholm. “That is likely to take place in 2019 and I believe it will create a true highland games atmosphere with rolling hills and pathways, trees,  grassy open spaces and of course a great main stage. There may even be RV parking.”

“The City of Coquitlam had requested one of the 2018 BCHG events be held at the plaza and open pìobaireachd is a good fit,” says Chisholm.

The event begins at 5pm on Friday evening, and wraps up with the final competitor.  Each competitor is also invited to the BCHG Kick Off Ceilidh Beer Garden on the field at nearby Percy Perry Stadium that same evening.

The TD Community stage is located a short walk from the Lafarge Lake Douglas Skytrain station, also with ample parking.