BCPA Life Member Andrew Bonar passed away on October 13, 2017 surrounded by his family following a courageous battle against brain cancer.

“Boney”, as he was affectionately known, was a top Open piper who won all the major BCPA solo awards multiple times (MacCrimmon Memorial Cairn, Knockout Final, Annual Gathering Aggregate, Grand Aggregate), won top North American piping awards, captured the Silver Medal at the Northern Meeting in 2010, and placed 4th in the Gold Medal at the Argyllshire Gathering in 2013. 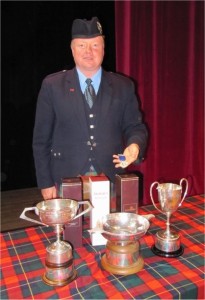 He was a front rank player and member of the Simon Fraser University Pipe Band for over 36 years winning five Grade 1 World Pipe Band Championships with the band.

He greatly contributed to piping in so many ways, as an inspirational teacher, adjudicator, composer, and music publisher and gave his tremendous musical talents to the advancement of highland dancing by piping for all levels of the art.

He also significantly gave of his time and talents administratively, serving for many years on the BCPA Adjudication Committee, chairing the Grading Committee, and contributing as a member of the BCPA Board of Directors, BC Highland Dancing Association Board of Directors and President, United Scottish Cultural Society Board and United Scottish Societies Auditorium Limited Board.

Boney was an innovative leader in several other ways. He established the Competing Pipers Association Combined B&C Grade Piobaireachd event at the Annual Gathering, the first CPA sanctioned competition outside the UK, to enable young Open players to build their CPA competitive track records in North America. For many years, he donated funds to support the prize monies for the event. 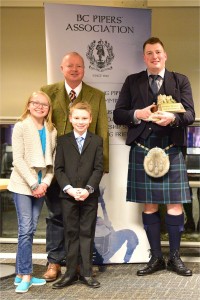 In 2016, he created the Boney Music Invitational, an invitational Open piping competition featuring the top BCPA Grand Aggregate standings players to raise monies for brain cancer research for the BC Cancer Foundation. At his request, BCPA will be continuing his legacy with this competition and charity fundraising event.

On behalf of all BCPA members, the Association offers its sincere sympathies to his wife Jeanette, daughter Kate, son Cameron, and the extended Bonar family in their time of great sorrow.