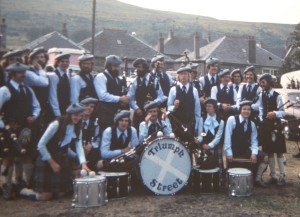 Triumph Street in 1976 was a very young band – we were short on experience but developing confidence with our sound and musical presentation. We looked forward to our first trip to Scotland to compete in Grade 1 and get ourselves established as a legitimate Grade 1 band. In those days, in the minds of most of the Scottish pipe band community, the British Columbia west coast was a distant musical colony. We anticipated a bit of an uphill climb.

Triumph Street at the 1976 World Championships in Hawick

The World’s Championship that year was in Hawick – a good bus ride from Glasgow, but a delightful venue. The weather was pleasant, there were lots of trees, and we had a great tuneup prior to the contest. I think we turned a number of heads with the sound we were able to produce (we looked slightly scruffy, I suppose, and we didn’t even have matched kilts by then.). Anyway, we put on a what I thought was a solid medley performance on the field (a recording is the performance is located here).

I suppose to no-one’s surprise (but to my great disappointment) we didn’t get on the prize list, and in fact got buried towards the bottom. There was some memorable grumbling on the bus going home, but we didn’t get discouraged. We also took pleasure in watching the CP Air Pipe Band putting on a good show in their grade. They were a cracking good Grade 2 band. 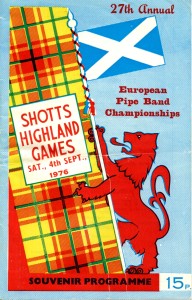 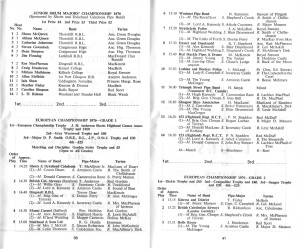 By the time the European Championships rolled around, I guess the word had gotten out that we were a legitimate contending band. We played our MSR in grimy weather at Shotts later in the trip.

The band felt good about our performance that day (a recording of the performance is located here). Our band got a good listen from the judges, and we picked up a fourth. 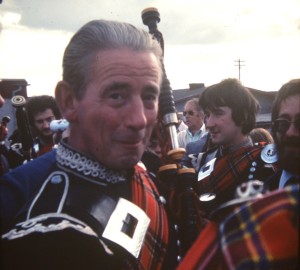 The Master and the Pupil: P/M Bob Hardie of Muirhead & Sons (centre) and P/M Hal Senyk of Triumph Street (right), Scotland 1976. Hal played in the Muirheads in 1972 under Bob and used his tutelage to lead Triumph Street to place ahead of Muirheads at the 1976 European Championships. The prize also marked the first time a BC Grade 1 band had cracked the prize list at a RSPBA Championship.

Fourth place at the European Championships was a huge, gratifying victory for the band. If I recall correctly we put back a bit more beer than was good for us on the bus ride home. Wonderful memories of the trip.

The precedent had been set by both Triumph Street and CP Air that year. Certainly, the west coast bands haven’t needed to look backwards since.