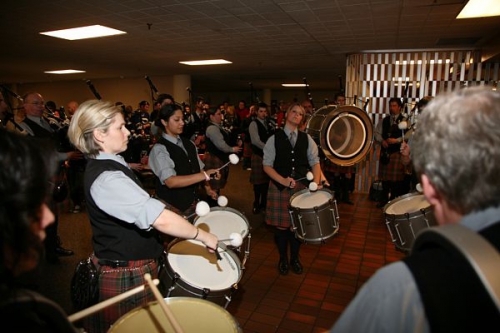 The Annual Gathering Committee has secured an arrangement with SFU’s Meetings, Events and Conference Services Department to hold the Annual Gathering Ceilidh at the Halpern Centre, which is the building directly west of Images Theatre (where the band contest will be held) on Saturday, March 30th.

The Ceilidh will be for all ages, with non-alcoholic and alcoholic beverages and some fast food available for purchase.

In addition to its social partying opportunity, the Ceilidh will feature short performances by the Annual Gathering aggregate winners as well as a challenge for the “Clansey Cup”.

The Clansey Cup is an impromptu piping competition where the winner becomes the judge for the competition the next year at the location of his/her choice.

The Clansey Cup has been held in several locations around North America throughout its many years.

So come out and support the Ceilidh and enjoy a great social, piping and drumming windup to the weekend’s competitions.