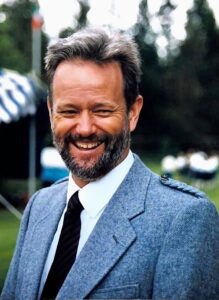 Colin MacKenzie died peacefully in his sleep on October 10, 2021, following a long struggle with Parkinson’s.

Colin was born in Portland Oregon to Johanna and Duncan MacKenzie. He was the oldest of four children. At the age of seven, Colin began learning the bagpipes from his father, and along with his siblings, the MacKenzie family entertained all over Oregon with their Scottish pipes, drums and dancing.

In 1967, he married Bonnie Blyth, who was a close family friend and fellow performer and dance teacher. After graduating from Portland State University in 1972, Colin and Bonnie moved to Lake Oswego where they lived for more than 50-years. There Colin passed on his love of the bagpipes to generations of students.

Colin and his students enjoyed many awards and accomplishments during his piping career. He won the Medallion in Coeur d’Alene in 1974 where he also won a trip to compete in Scotland. He was a member and pipe major of the Blue Heron Pipe Band which became the first Grade 1 band in the US. He was also a member of the Abbotsford Police Pipe Band. He became a much sought-after judge at many piping competitions in the Pacific Northwest.

Colin had a wonderful sense of humor and was well-liked by everyone who met him.

Colin is survived by his daughters Holly Kelly and Shona MacKenzie, his son-in-law Mark Kelly, grandsons Torrin and Brennan Kelly, sister Marianna MacKenzie Day, and brothers Peter and Ron and their families. Colin’s wife Bonnie passed away in August, 2021.