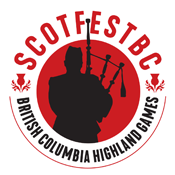 The results of the 2021 ScotFestBC – The British Columbia Highland Games are now posted on the Results page.

They include the per event results and the aggregate winners in the solo events.

Some photos from the 2021 ScotFestBC – The British Columbia Highland Games are in the BCPA Photo Gallery with more to be published later this week by the various photographers.

The Games were the second and final outdoor piping & drumming competition of the COVID-19 pandemic impacted BCPA 2020/21 season.

Like the Campbell River Highland Gathering in early August, while the competitor numbers were low, many players, adjudicators, stewards, officials and attendees appreciated the “highland games atmosphere” and opportunity to connect again socially after an absence of over two years.

The Friday night Piobaireachd in the Park drew a significant sized crowd who took in performances by Jack Lee, Alan Bevan, Alastair Lee, and Zephan Knichel with Shaunna Hilder providing informative explanations of the music and player interviews for the audience.

On the Saturday afternoon, the White Spot, Robert Malcolm Memorial, Greighlan Crossing, and RCMP Pipe Bands along with pipers from the Simon Fraser University Pipe Band each performed non-competition selections with David Hilder guiding the audience in understandings of the aspects of the performances. And the Games finished with a well appreciated massed bands performance next to the “Big Tent”.

BCPA would particularly like to thank Mike Chisholm, Executive Director of ScotFestBC – The British Columbia Highland Games, the Organizing Committee, and the United Scottish Cultural Society and for their tireless and tremendous efforts in bringing this year’s event to fruition amidst many challenges of the pandemic and under STEP 3 of the BC Restart Plan for Fairs, Festivals and Tradeshows.

And finally with this the close of the season, to all members of the piping and drumming community in the Pacific Northwest, who have supported online competitions, events held by highland games associations, and piping & drumming retailers this season, your support is greatly appreciated as we all have faced this pandemic together, to continue advancing piping and drumming during these challenging times.