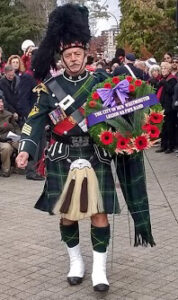 Mike Carpenter, the well-known and long-time pipe major of the City of New Westminster Pipe Band passed away suddenly while on a camping trip with his wife and friends recently.

A former professional boxer in his youth, Mike emigrated to Canada from Scotland and joined the Vancouver Police Department. He served as pipe major of the City of New Westminster Pipe Band for 20 years. Mike had a gregarious and outgoing personality and was generous in sharing his piping talents with his band, the Legion and the New Chelsea Society.

He will be missed by many friends and acquaintances. Our condolences to Mike’s wife Vicki, his family and the City of New Westminster Pipe Band.

June 23: BCPA would like to apologize for publishing a wrong photograph in an earlier version of this article.