Elouise has memories of her Mom using her piping and highland dancing talents together in some evening shows where she would tie her pipes securely onto her body and dance a jig while piping for herself.

BCPA extends its sincere condolences to the extended Roane family and is grateful to the family in memory of Jessie through BCPA charitable activities.

Jessie Roane (nee Nicholson), born April 27th, 1930, in Vancouver, B.C. passed away peacefully December 19th, 2020, in Burnaby, B.C. She was the middle daughter born to Elsie and Pipe Major Malcolm Nicholson, C.M. and was raised in a home that was filled with singing, dancing, and bagpipes. Naturally, Jessie became accomplished in all of these and had a flair for entertaining. During WWII, Jessie, and her sister, were hired by the Canadian government to entertain at Air Force bases on the Pacific coast. 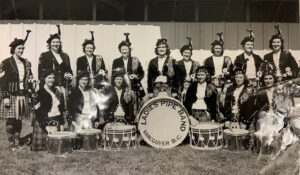 Jessie also did some acting work with Alan Young in Hollywood. In 1964, she would sing live on the CBC radio show called ‘Judy Ginn and Her Friends’ under her stage name, Ann Dawson. Jessie also performed with Vancouver’s “King of Swing”, Dal Richards C.M. OBC. Jessie was a dancing instructor to the dancing teachers, who taught at Arthur Murray Dance Studios. She was a piper in both the Vancouver Ladies Pipe Band and Burnaby Ladies Pipe Band. Throughout Jessie’s life, she continued to entertain at Burns’ Dinners played Marilla in Anne of Green Gables in a Burnaby Players production, was a member in the Gabriola Island Singers choir, and performed throughout Nanaimo singing in a duet. 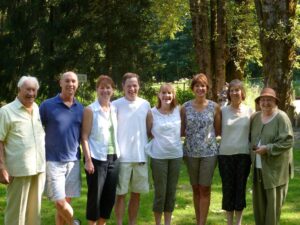 Bill and Jessie Roane with their children 2011

Jessie married the love of her life, William (Bill) Roane on June 17th, 1950. They shared 64 loving years together before Bill’s passing in 2014. The Roane home was very busy with their six children. All the children followed their Mother’s musical lead. She coordinated and chauffeured to many activities, including piano, bagpipe and drum lessons, pipe band practices, school band practices, sporting, and highland games events. Jessie was also a nursemaid to the menagerie of pets that came into the home. The neighbours often were amused by all the activities taking place at the Roane household. Jessie was passionate about sewing, many crafts, and making our house a welcoming home. She loved to entertain and the Sunday dinner table was always open.

Jessie and Bill enjoyed many years of boating and, after Bill’s retirement, they moved, first, to Gabriola Island and then to Nanaimo. Jessie was very active in local politics and could be heard, often, as a caller to local radio stations, and her opinion letters were published in the Canadian magazine Dialogue. The phrase on her beloved fridge magnet read, “Yes, you are entitled to my opinion”.

In lieu of flowers, donations in Jessie’s name may be made to the BC Pipers Association.

A celebration of Jessie’s beautiful and full life will be held at a date to be determined.