November 11, 2020 Remembrance Day ceremonies in many communities across British Columbia were cancelled or significantly limited due to the COVID-19 pandemic restrictions on gatherings.

As a result, the sounds of pipes and drums at cenotaphs and legions on this solemn day were largely silenced, except for a few specifically designated ceremonies in major cities and in the days before at schools, that included limited participants, social distancing and mask wearing. 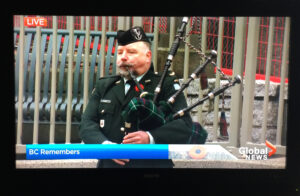 One of the specifically designated ceremonies, at the Victory Square Cenotaph in downtown Vancouver, was broadcast live on GlobalBC TV with Vern Kennedy of the Seaforth Highlanders of Canada Pipes & Drums performing the lament, The Flowers of the Forest. 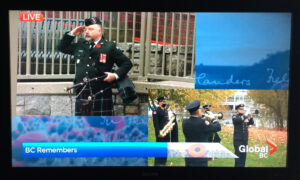