To commemorate the 60th anniversary of the B.C. Pipers’ Newsletter, the archival issues of the Newsletter will be serialized on the Historical Newsletters page of the BCPA website, releasing a year’s Newsletters each week, and we have asked its second Editor, BCPA Life Member Bill Elder, to provide his reminiscences of editing and publishing the Newsletter.

The 60th Anniversary of the B.C. Pipers’ Newsletter
By Bill Elder 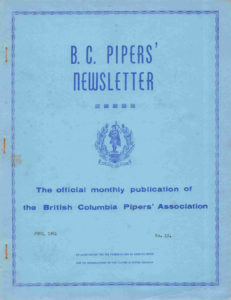 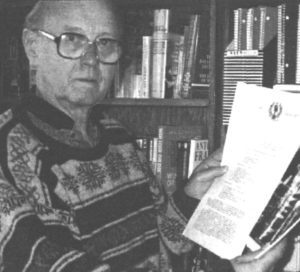 This past April marked the 60th anniversary of the B.C. Pipers’ Newsletter. During these years, there were 14 editors, publishing 343 Newsletters. The first Editor was Ian Walker who published the first 90 issues starting in April 1960 and finishing in April 1969. We, in the BC Pipers’, owe a great deal of gratitude to Ian for his dedication to ensuring the history of our Association was kept alive. As well as being the first Editor, Ian published two books, “Pipe Bands of British Columbia” and “Pioneer Pipers of British Columbia”. These books are invaluable references for anybody interested in the history of piping in BC. Ian also served as BCPA President from 1959 to 1963, and was a lawyer, magistrate and provincial court judge in Squamish for many decades.

During those early years, people need to remember there was no such thing as Facebook, Twitter, or Email. Any communication was done by phone or through the postal mail. Ian had the idea of having a regular newsletter that would keep members up to date on the happenings in the piping world, particularly in BC.

Producing the Newsletters was no easy task. For those who remember the name “Gestetner”, it will bring chills to your spine. Pages needed to be produced by typing the information onto a stencil, fitting the stencil onto the Gestetner Cyclograph machine and then carefully adding ink to the machine. The first Gestetner we used had to be cranked by hand in order to feed the paper through the machine to produce a finished page. If the stencil ripped or too much ink was added, it was back to square one and you started all over. After the required number of pages were printed, it was on to the second page and so on.

Once all the pages had been printed, they were placed in stacks on the kitchen table and the Editor, his wife, family and friends would walk around and pick up the first page and then the second page until all the pages had been collated. Very hands on and very time consuming. Then the Newsletter had to be stapled, placed in an envelope and addressed by hand

, no labels in those days. Again, a terribly slow process. Off to the post office where a stamp went on the envelope (a few cents in the beginning) and it headed out to homes. After a few days rest, the process started all over again, as the Newsletters were published monthly.

The Newsletter was the main source of information for members. It advised people when competitions were, the dates and location of the summer highland games, and the names of prize winners, but this information would not fill a Newsletter. The biggest job was writing articles that members would find interesting and hopefully would generate discussion in upcoming Newsletters. Like any editor, sometimes you would write something with the idea that people might get agitated and write a response. Often writing about controversial topics created the best Newsletters. One such topic included standardizing methods of adjudicating. We even had judges from Scotland writing to give their opinion. Another was dress and deportment in bands and individual performances.

Another contentious topic at that time was types of membership. When the B.C. Pipers’ was organized there were two types of membership, Active and Associate. Active members had to be pipers and they were the only members who could vote. If you were not a piper, you could join but only as an Associate member with no voting rights. It was felt by some people that the organization was not doing enough to support drummers and pipe bands so the Western Pipe Band Association was formed and the Newsletter became the vehicle for interested parties to express their opinion about the advantages of one organization over the other.

The Newsletter Editors wrote a “tongue in cheek” editorial expressing the opinion that the Western Pipe Band Association was being formed just so drummers would have a voice. The editorial was meant to show how silly it was to have two organizations doing essentially the same work. If the B.C. Pipers’ allowed anyone to join and be an active voting member the Association would be much stronger. Drummers took the editorial in quite a different way and we had lots of letters to fill up the Newsletters as well as lots of irate phone calls. Eventually the B.C. Pipers’ changed its policy and bylaws and all players who joined had full voting rights. The Western Pipe Band Association gradually faded from the scene.

I asked a few of the previous Editors to comment about their time as Editors.

Angus Macpherson, who was an Editor on 3 different occasions and responsible for 74 issues commented:

When I look back on doing the Newsletter, what makes me laugh is how much time it took to produce and how antiquated all the steps were, compared to today. During my first stint as Editor from 1972-1976, it took an entire weekend each month to get the Newsletter out in the mail. It also took a family effort – Jan MacDonald (sister-in-law) did the typing (on a Smith Corona portable electric typewriter), Judi (my wife) printed it on the automated Gestetner machine (at least we didn’t need to crank the handle – wow, cutting edge stuff), Mr. Taylor (Judi’s dad), maintained the mailing list (all handwritten) and Mrs. Taylor sealed and put the stamps on each envelope. Colin Abel (for the first two years) did the writing with me, and together we all collated and stapled each issue in the Taylors’ basement. I think we had slightly over 400 members in those days and some of our editions were 40 pages plus. That would be in excess of 8000 pieces of paper spread along the bar in their rec room.

It was a much easier gig in the 1980s. Judi typed it, albeit still on an electric typewriter, we dropped it off at Brer Rabbit Printers in New Westminster and they printed it, collated it and stapled it. All that remained for us was to mail it out using labels. Progress for sure!

It was great fun.
Angus

Graham Davidson, who was the Editor in the early 1990s, recalls buying his first computer to produce the Newsletter, so as well as writing articles, typing editorials, results etc. he struggled to learn how to do this on new technology.

In conclusion, one thing that sticks in my mind is how popular and important the Newsletter was. People anxiously waited for each issue. The Newsletter was filled with important topics of the day, judges from Eastern Canada and Scotland would regularly write articles.

Famous pipers such as Pipe Major Donald MacLeod and Captain John MacLellan would write and contribute some of their recent compositions. Competitors who had won prizes at the Games wanted to see their name in print and were anxious to show their grandparents. If the Newsletter was late in arriving, people would want to know when it was coming. Unlike today, it was the only source of information.

I hope people will enjoy reading these archival Newsletters.

Bill Elder
(hopefully on behalf of all previous Editors)