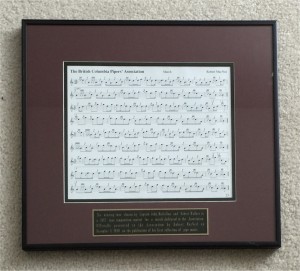 April 20, 2017 marks the 30th Anniversary of the tune for the British Columbia Pipers’ Association.

In the lead up to the 1987 Annual Gathering, Captain John MacLellan, who was adjudicating that year’s Annual Gathering with Robert Wallace, recommended that a tune composition competition be held for a tune to be named for the British Columbia Pipers’ Association.

On Easter Monday April 20, 1987 at the home of Ian and Mary MacKinnon, Captain John MacLellan and Robert Wallace announced that they had selected my submitted composition as the winning tune (sheet music is located here).

At the announcement, to which I was invited, Robert Wallace played the composition and Captain MacLellan indicated that he would like to include it in the reprint of his book “Music for the Highland Bagpipe”.

Several years later, I framed the tune and formally presented it to the Association on December 8, 1990 on the publication of my first book of music.

The Pacific Northwest is fortunate to have many bagpipe music composers whose great compositions capture the people, places, and events of our area and times. May more great bagpipe compositions continue to be created by the next generation of players.