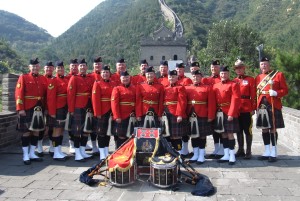 It was a trip of a lifetime for 30 members of the RCMP E. Division Pipe Band based out of Surrey, BC. To celebrate the band’s 10th anniversary, the band including spouses and five highland dancers from the RCMP K. Division Pipe Band in Edmonton travelled to Beijing, China on September 26 for the Beijing International Tourism Festival.

Under Pipe Major Hugh Peden, Drum Major Mike Guillemin and flag bearer Sgt. Ed MacKenzie, the band dressed in RCMP red serge performed at the festival events on September 30 and October 1 along with dozens of other musical and dancing acts from around the world. The festival has been underway for numerous years and has attracted several other Canadian pipe bands, including Greighlan Crossing which attended the festival in 2010. 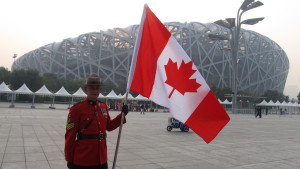 The highlight of the trip was playing for the festival crowds and dignitaries in the shadow of the Birds Nest in Beijing’s Olympic Park. Other highlights included mingling and performing with the bands and dancing troupes from Poland, Germany, Tibet, Latvia, India and dozens of other countries and visiting The Great Wall of China for a photo op and a bit of hiking (and highland dancing).  One of the pipers also proposed to his girlfriend on the wall (she accepted.) The band visited Tiananmen Square, the Forbidden City, the Summer Palace, a jade and silk factory and Heaven’s Garden. It was a packed agenda, all led by Chinese interpreter Eric who despite his difficulty with the English language, still managed to smile and get the band to all its events on-time and without any problems. 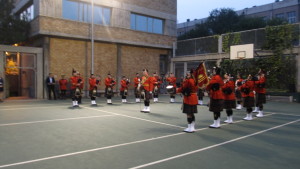 and also held a special evening performance at the Canadian Embassy in Beijing on September 28 for the Canadian ambassador and embassy staff. It was a great introduction to Beijing, and was followed up with a visit to an Irish pub with some of the embassy members. The packed week-long agenda had the band up and out of the hotel by 8:30 most mornings, which wasn’t helped by late night gatherings in various hotel rooms.  Food was generally excellent, and one band member was heard to exclaim when she got back that it was a shock not to see supper appear instantly when she sat down. 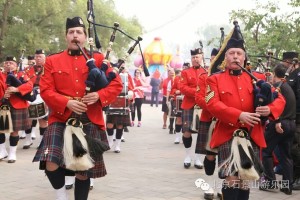 Despite some very hard beds, bumper-to-bumper traffic, hours of standing around and a lot of rice, it was a fantastic trip. The bands’ Chesney chanters and reeds performed very well in the humid and smoggy conditions of Beijing and required a minimal effort to bring the whole band together each day.  There were few technical problems with instruments but some minor translation issues on where the band should start and stop while on-parade.

Weather conditions in Beijing was great, with most days in the 25C range. There were even two days of relatively blue skies at one point. The band is now well rehearsed and ready to tackle a new year and new tunes. Plans are already underway for another major trip within two years. If you are a Grade 3+ piper or drummer looking for a musical challenge and a bit of international travel, contact PM Hugh Peden. The band practices on Tuesday evenings at RCMP headquarters in Surrey (Green Timbers).