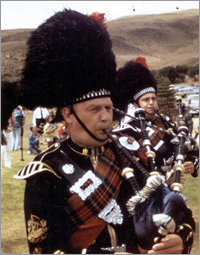 Andrew “Andy” Perrie, the longest serving pipe major and band member in the history of the Vancouver Police Pipe Band passed away on September 5, 2015.

His obituary will appear in the Vancouver Sun on September 12.

The Vancouver Police Pipe Band will be remembering Andy during their performances at the Longs Peak Scottish Irish Festival in Estes Park, Colorado September 10 to 13.