The 1970 Scotland trip by the Vancouver Kiwanis Boys Pipe Band was a remarkable competitive achievement and a catalytic event that sparked the rapid rise of BC pipe bands on the international competitive stage. The pioneering vision and drive of piping instructor and BCPA Life Member Malcolm Nicholson to take juvenile pipe bands to compete nationally and internationally, and his dedication to the development of young pipers was significantly recognized in 1978 when he was made a Member of the Order of Canada. The continued development and success of juvenile pipe bands across the BCPA region for many decades is a testament to his spirit and vision.

In 1970 Malcolm Nicholson took the Vancouver Kiwanis Boys Pipe Band to Scotland. The band stayed in the bucolic surroundings of the Lawmuir Agricultural School near East Kilbride not far from Glasgow.  The boys enjoyed practices, impromptu football games and the famous roast tatties in the school dining room. 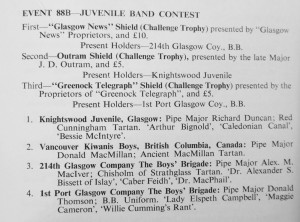 The band competed at Dunoon in the Cowal Pipe Band Championships, placing first in Juvenile grade and winning the Glasgow News Trophy. This was the first time in 63 years that a band from outside Scotland had won this prize and the officials were a little reluctant to let us take it with us!

Of note: just over a year later, bass drummer Terry Leonard and ten of the pipers from this band joined with leading drummer Willie McErlean to found the Triumph Street Pipe Band. 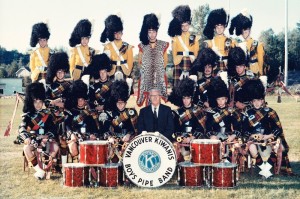 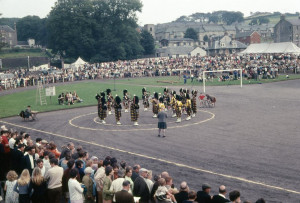 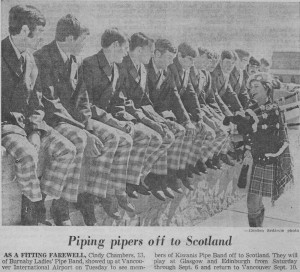 “Piping pipers off to Scotland
As a fitting farewell, Cindy Chambers, 13, of Burnaby Ladies’ Pipe Band, showed up at Vancouver International Airport on Tuesday to see members of Kiwanis Pipe Band off to Scotland. They will play at Glasgow and Edinburgh from Saturday through Sept. 6 and return to Vancouver Sept. 10″ 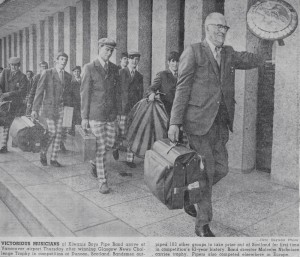