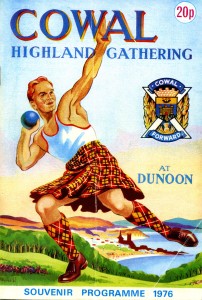 1976 was a very good year for the Canadian Pacific Airlines (“CP Air”) Pipe Band. The band really became a significant force in early 1975 and consisted of many strong young pipers and drummers. As I recall, pretty much everyone in the band at that time was competing at the Grade 1 or Grade 2 solo levels. Bands were much smaller in those days and we were of average size with 11 pipers, 4 snares, 2 tenors and a bass. In 1975 the band had done very well competing at the Grade 2 level in British Columbia. We traveled to Ottawa to compete in the Canadian Championships and were successful in winning the Grade 2 Open Championship. When the band returned home we set our sights on Scotland, 1976. 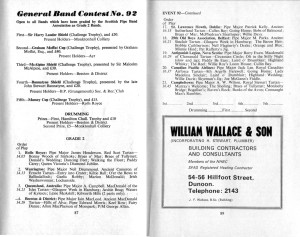 The band became quite a bit stronger in 1976 with a dedicated winter practice schedule and the addition of a few new players. Keith Manifold had been instructing the drum corps until that point but joined the playing ranks as lead drummer. Three excellent young pipers (Bruce McIntosh, Alan Wilson, and Don MacNeil) were moved up from our junior band for that summer and helped to strengthen the pipe corps. 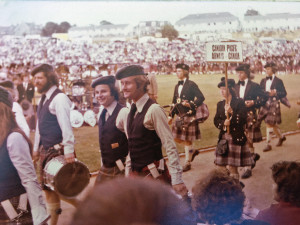 Heading to Scotland we didn’t know quite what to expect. The Scottish and Irish Grade 2 bands were very strong. The Antigonish Legion Pipe Band, led by Barry Ewen, was also very strong. The first contest of the trip was the World Pipe Band Championships in Hawick, Scotland. The band played quite well that day but finished 10th. I must say we were a bit disappointed. The band from Antigonish had finished 3rd and we were very happy for them. There wasn’t much time off after the Worlds and we spent most of the week practicing and getting ready for Cowal the following weekend. 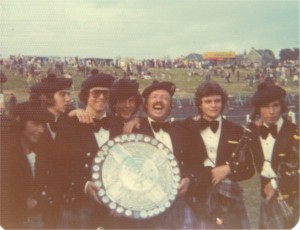 In those days, most of the bands took the ferry to Dunoon. We did just that, tuned up in the park near the ferry and played our way up the street to the games field. I remember thinking that our tone that day was the best it had ever been. We were all playing sheepskin bags and cane reeds but the sound was particularly stable and easy to tune. We played well in the competition and finished first that day (Note: Part of that performance is located here. The initial part of the recording had severe distortion and has been deleted while the remaining recording still exhibits moderate distortion). It was a grand celebration among the band and parents on the trip. The after-games parade down the street to the ferry, carrying the Sir Harry Lauder Shield, was particularly fun and celebratory.

We stayed on for another week to compete at three more games: the Princes Street Gardens contest held in Edinburgh the day after Cowal, the European Championships held in Shotts, and a contest in Peebles. We won first prize at the European Championships and Peebles, and placed 3rd in Edinburgh. To go to Scotland and take first prize in three large highland games was a terrific accomplishment for this band of teenagers.

As the years have gone by, most of the band has dispersed. Some went on to play in other pipe bands. Some formed the early nucleus of the Simon Fraser University Pipe Band. Some put their pipes and drum sticks down and went on with their education and careers. I have had the opportunity to bump into most of the band at various points since 1976. It fills us with pride and happiness to reminisce about that terrific trip in August, 1976. 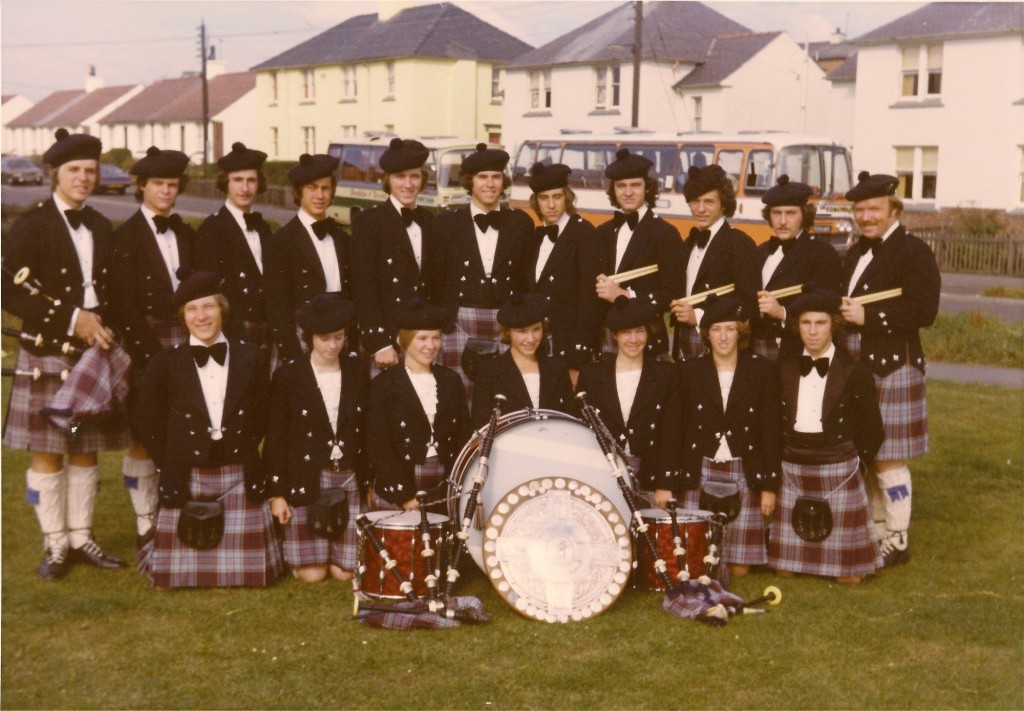