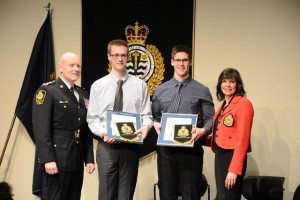 On Tuesday, January 19, 2016 two members of the piping and drumming community, Brian and Graham Haddon, were awarded the Certificate of Merit for their roles in saving a woman injured in a traffic accident in August 2014. The Certificate of Merit is the highest civilian honour awarded by the Vancouver Police Board.

Brian, a piper and Graham, a drummer both with Simon Fraser University Pipe Band, were heading to the airport on the way to the World Pipe Band Championships in Scotland.

Full stories can be read at the links below: