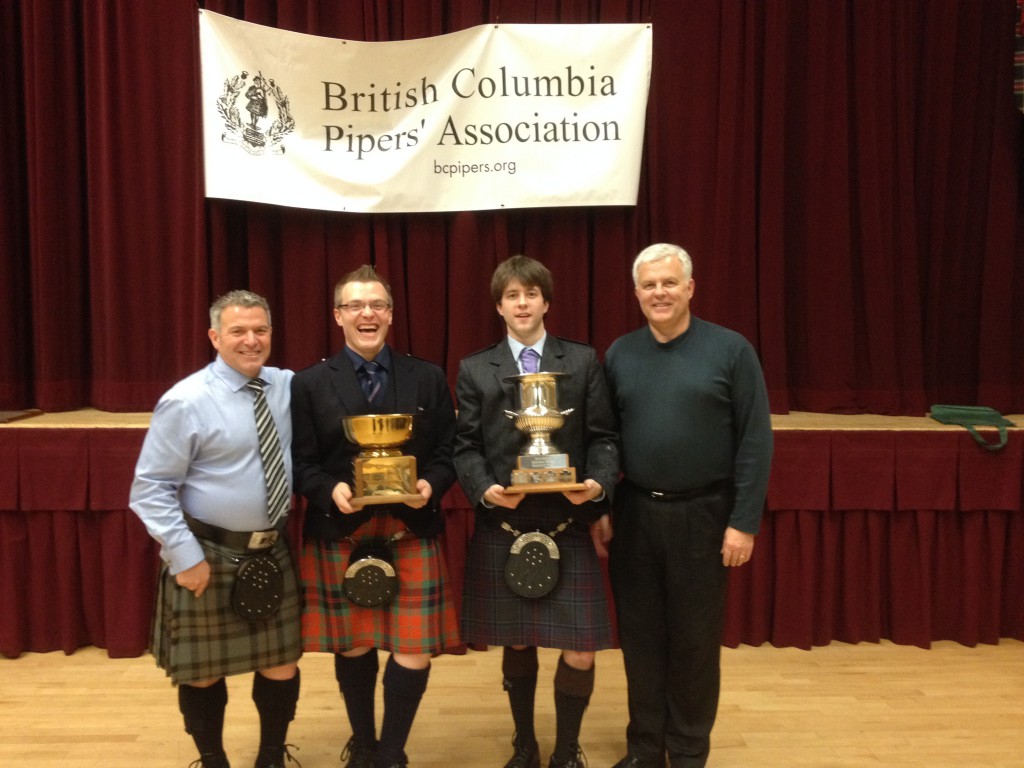 Alastair Lee of Coquitlam, BC and Grant Maxwell of Surrey, BC won the BCPA Knockout Finals in Piping and Side Drumming, respectively, at the association’s Annual Dinner on Saturday, March 15  before an audience of over 100 attendees.

Alastair captured the Davie Moore Memorial trophy, which was dedicated over thirty years ago by the Clan MacFarlane Pipe Band in honour of their late piper, to promote BC-Ontario piping/pipe band exchanges.

All competitors in the Piping Knockout received the Donald Ross medal, in honour of the late BCPA Life Member who established the BCPA Knockouts in 1969.

All competitors in the Drumming Knockout received the Willie McErlean medal, in honour of the BCPA Life Member and 1979 World Drum Corps Champion.

Special presentations on the evening included:

– The annual Mary MacKinnon Memorial Service Award to Bill Quigg and Ruth Whyte  for their advancement and excellence in the administration, promotion and organization of piping, drumming, pipe band activities and highland games in the Comox Valley of central Vancouver Island.

– Framed commemorative pictures to BCPA members Jack Lee, Alan Bevan, James P. Troy, Andrew Bonar and Alastair Lee for their exceptional competitive achievements at the 2013 Argyllshire Gathering, including the capture of the Senior Piobaireachd, and the Gold and Silver Medals.

For the fourth year running, the evening’s events were live streamed on the Internet with 66 unique viewers watching throughout the evening.

In tribute to the recent passing of prominent BC piper and adjudicator Steve Geddes, Andrew Bonar finished his performance with the famous Colin Magee composition “Captain Geddes’ Turnabout”.